Posted on October 29, 2014 by Jennie Scholick in Class Profiles | Leave a comment

While Princeton’s most famous superhero alum is probably Bruce Wayne, aka Batman, today I’m pleased to present our newest, up-and-coming, superhero alum: Pete Ploszek ’09, who recently appeared as Leonardo in the new Teenage Mutant Ninja Turtles movie. Pete was kind enough to take the time out from his busy acting and auditioning schedule to answer some questions about his life since Princeton. 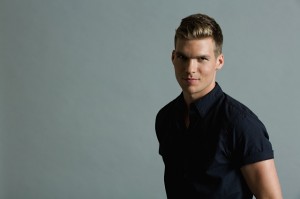 I played four years on the football team, which (like any sport) had a tendency to dominate the schedule. But I managed to take part in some opportunities around campus that proved to be pretty life-changing, like studying in the theatre program. I took my first acting class in the spring of my sophomore year and joined two productions (Miss Julie, Angels in America) before graduating. Also, I served as president of Cottage Club my senior year.

After graduating I went straight to USC, earning my Masters of Fine Arts (MFA) from the School of Theatre in 2012. I was fortunate to secure a manager and agent coming out of school, so that allowed me to hit the audition process right away. I booked two single-episode gigs on Parks & Recreation and Shameless, followed by my first feature, Teenage Mutant Ninja Turtles, for Paramount. While a sequel to TMNT has been announced, my focus is back on auditioning and trying to line up the next gig. It’s all very up-and-down and unpredictable, so you never know what kind of opportunity is (or isn’t) around the corner.

My wife Daniela (’09) makes my life better every single day. She’s given me a self-confidence I didn’t think was possible. She’s showed me how one attracts more bees with honey than vinegar (who knew!). And she provides a really safe, judgment-free space to fail and fall on my face while I figure out how to build a career. I’d be facedown in a roadside ditch by now without her.

I imagine his first questions would include, “Why are you so skinny?” “Where did you get all those feelings?” and “What the hell is gluten-free?”

As fickle as the acting pursuit can be, I’m truly doing what I love – and with a wife who’s game to sit in the front row on the rollercoaster. To me, it doesn’t get any better than that.

If you know anyone who should be featured in this space, please email me at Scholick@alumni.princeton.edu.