Posted on October 1, 2014 by Jennie Scholick in Class Profiles | Leave a comment 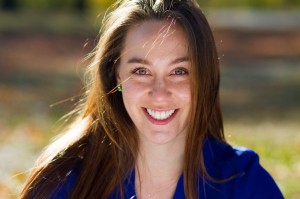 Hello Class of 2009! Welcome to a new website feature: ’09 Class Profiles! I’m thrilled to kick off this project and add some depth to our monthly class updates in the PAW.

For the first installment of ’09 Class Profiles, I’m thrilled to introduce Chloe Angyal. Chloe is the Senior Editor of Feministing, the world’s most-read feminist publication, and recently finished her PhD in Arts and Media from the University of South Wales.

Chloe was kind enough to give us some awesomely thoughtful answers to my questions about her life since Princeton. I hope you enjoy reading them as much as I did!

I was in Expressions Dance Company, which I absolutely loved. I really miss rehearsing and performing with a group of dancers, and I met some of my dearest friends through Expressions. I was in Eating Concerns Advisers (ECA), which was emotionally hard, but totally necessary; Princeton had, and still has, such a culture of perfection, and for a lot of women that manifests in really unhealthy eating and exercise habits, and, in some cases, in eating disorders. At the start of senior year, I co-founded a feminist blog, Equal Writes, with Amelia Thomson-DeVeaux ’11. The more work I did with ECA, the more I started thinking about gender issues on campus, and the more dismayed I became by the very real sexism at Princeton: sexual violence, slut-shaming, the stunningly low numbers of women professors I had, even in the social sciences – to name just a few examples. In 2008, the feminist blogosphere was really becoming A Thing, and I wanted to be a part of it. I wanted Princeton to be a part of it, too – we had never had a feminist publication, in the almost 40 years since coeducation, and we so desperately needed one.

Talk about what you’ve been up to since Princeton.  What are you currently working on?  What has the path been like to get to where you are today?  What’s next?

When I think about the path I took out of Princeton, I think less of a path and more of beating through the bush with a vague destination in mind, but no map, no trail, and a compass that only works some of the time. I knew when I graduated that I wanted to write, and I wanted to write about gender issues, and I wanted to be paid to write about gender issues. There were lots of people who had the kind of career I wanted, but there was no set route for getting to where they were. I really envied my peers who were going into fields that had set trajectories, because while those paths were arduous, at least they, you know, existed. Then again, what most of us had in common was that we had a tough go of finding work when we graduated. Getting paid to write about gender issues in the 2009 job market was a tall order, and it still is, in many ways.

So I took non-writing jobs and after hours, pitched op eds to lots of places, and when I got published it was unpaid.

I started blogging for Feministing, which is the world’s most-read feminist blog, and the publication that inspired me to start Equal Writes. That was a dream come true, and after a year there, they promoted me to Editor, and last year, to Senior Editor. I’ve learned more about feminism and social justice and journalism in my four years there than I would have dreamed possible. My colleagues there are brilliant, always pushing me to be better and smarter and more thoughtful, and I’m so damn lucky that I get to work alongside them. That said, Feministing operates on a shoestring budget, so while that checked the “write about gender issues” box, it didn’t check the “get paid to do it” box.

Fortunately, having Feministing on my resume made it easier for me to pitch to places that would pay me to write, and I’ve been freelancing steadily for more than four years now. I write about politics and pop culture, and about body image and reproductive rights and sexual violence, among other topics, and I’ve been published in the US, the UK, Australia, and France. But my favourite piece, by far, was the one I co-wrote with my then-98-year-old grandmother ahead of the 2012 elections, about why the women’s vote is so important – she was born in 1914, six years before American women even had the right to vote. I love my work, in part because I think of it as a form of public service; I don’t just want to write, I want to write about things that matter. And I’m enormously fortunate that I get to think of work as a way to satisfy my own desires, rather than merely pay the rent. If you’re lucky enough to be in that position, I think you have an obligation to figure out what you’re good at, and figure out a way to use those skills to make the world a better place. As Alice Walker says, activism is the rent you pay for living on the planet – and if you also get paid to do that activism, well, you’re really fucking lucky (that second, foulmouthed part is me, not Alice Walker).

I also just finished my doctoral program at the University of New South Wales, in Sydney, Australia. My dissertation was about how Hollywood romantic comedies depict gender, sex, and power, and why. When I wasn’t incredibly tired, stressed, or overwhelmed by self-doubt, I really enjoyed it. That sounds very “other than that, Mrs. Lincoln, how was the play?” but I mean it. I loved digging in to one subject and learning it inside out. But it was three-and-a-half long, hard years, and I’m still getting used to not having a giant deadline hanging over my head. It’s the hardest thing I’ve ever done, emotionally and intellectually, and I’m looking forward to taking a few more months away from it and enjoy my new title of “doctor” before I start working on turning the manuscript into a book.

Finally, there’s The OpEd Project, which is an organization that’s devoted to changing the demographics of thought leadership in America. Did you know that only about 20% of opeds in American publications are written by women, and only about 13% are written by people of color? That’s a problem, because the oped pages drive news coverage and other forms of public debate, and an imbalance on the oped pages predicts an imbalance at higher levels of thought leadership – it’s no coincidence that the numbers for women in Congress look just like the numbers for the oped pages, or that 84% of Sunday political talk show guests are men, and that 90% of them are white. My very first job out of college was an internship at the OEP, and it was thanks to them that I knew how to write and pitch opeds in the first place. For the last two years, I’ve been teaching their “Write to Change the World” curriculum all over the country, and I’ve also been mentoring with their year-long university Public Voices Fellowships; we work with universities, including Princeton, to identify faculty members who belong to underrepresented groups, and help those people find larger audiences for their expertise. Right now, I’m teaching the OEP’s Columbia and Yale fellowships, and it’s such a thrill to watch these scholars have exactly the same response to landing their first oped that I had: it’s an addictive rush.

Who is a Princetonian who has helped you along the way?  Can you talk a bit about how this person has been an influence on your life or career?

There are lots of specific Princetonians who have helped me along the way, like Helen Coster, who’s my editor at Reuters and Eleanor Barkhorn, who’s my editor at The Atlantic; Melissa Harris-Perry, who has given me the opportunity to reach a wider audience through her TV show; and my former preceptor Rachael Ferguson and thesis advisor Viviana Zelizer, who have cheered me on and served as referees for me on multiple occasions.  Amy Aronson ’85 has been a mentor and surrogate mother since I moved to the US to go to Princeton, and that I’m tremendously grateful for her sage advice and excellent hugs. I’m incredibly grateful to those individuals, and to so many others. But I also know I’ve been helped along the way by virtue of being a Princeton grad. People assume all sorts of things about you when they know you went to Princeton, most of them positive. Which means I’ve had doors open for me that wouldn’t have been opened to someone of equal talent and drive who went to a different school. In that sense, I’ve been helped along the way, and had my career influenced, by the prestige of the Princeton brand and the credibility that it bestows on people – whether they deserve it or not. I think it’s important that we recognize that going to Princeton doesn’t actually make you special – but it will make people think you’re special. And I think it’s important to use that privilege responsibly and generously.

The same thing that would surprise a lot of our Sophomore-year selves, I suspect: that being 26 and technically an adult doesn’t necessarily mean you have any idea what the hell you’re doing.

My wonderful friends. Writing a dissertation is such a lonely, solitary experience. I spent much of 2013 and the first half of 2014 working alone, arguing with words on a page written by people I’d never met, and I simply didn’t have time for much of a social life. I got pretty flakey for a while there, and was more or less incapable of holding a conversation about anything other than my dissertation. It was a relief, and a genuine joy, to come up for air at the end and find that my friends were still there, totally supportive and understanding, and ready to celebrate with me. I felt – I feel – so loved.