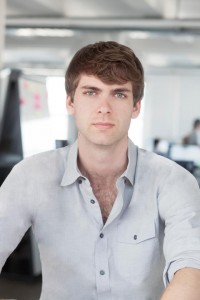 Carter Cleveland is the founder and CEO of Artsy, a startup whose mission is to make all the world’s art freely accessible to anyone with an Internet connection.

Carter was chosen by Forbes to headline the Art & Style category of its 2014 “30 Under 30” list and has been included in Art + Auction’s “Power List” (2013) and Business Insider’s “Rising Stars of New York Tech” (2012). He has received the Yahoo! Rookie Disruptor Award, given to the first-time founder with the highest potential out of the twenty companies selected to compete at TechCrunch’s Disrupt event. Carter has guest lectured at Princeton and spoken at international conferences including DLD and the World Economic Forum’s CEO Workshop Series.

Carter founded Artsy in his dorm room at Princeton, where he majored in Computer Science Engineering and was a member of the varsity squash team and diSiac Dance Company. His love for art was born from a lucky childhood spent being dragged to galleries and museums by art-obsessed parents. Some of Carter’s favorite artists include Gregory Crewdson, Shirin Neshat, John Baldessari, and Alexander Calder.